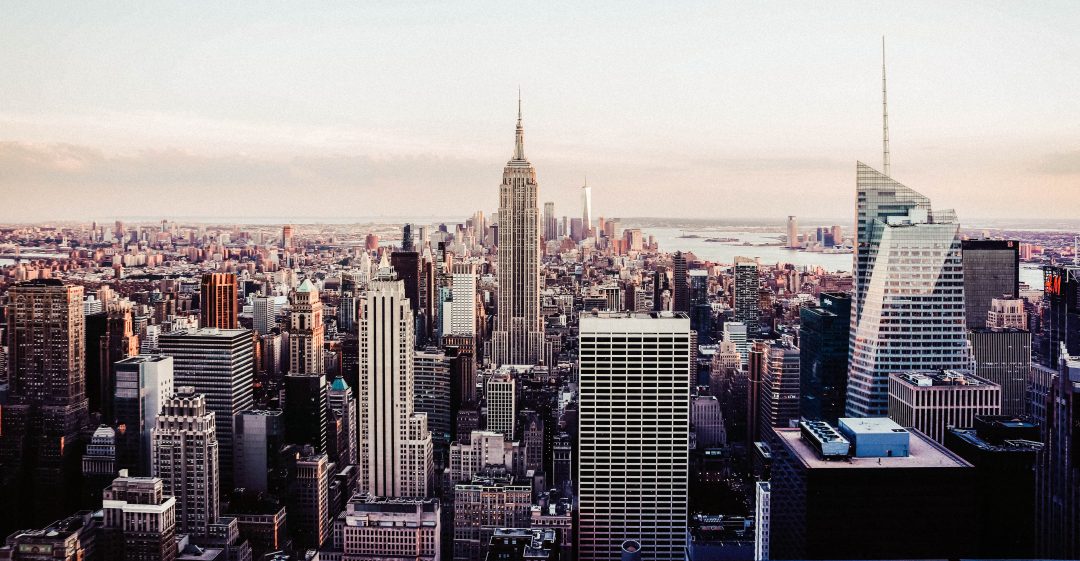 As you get older, it’s not easy to bring your friends together to travel. Everyone has their own ‘adult’ obligations. I am most fortunate to be part of a beautiful friendship. Where better to celebrate that friendship than in the most famous city in the world. 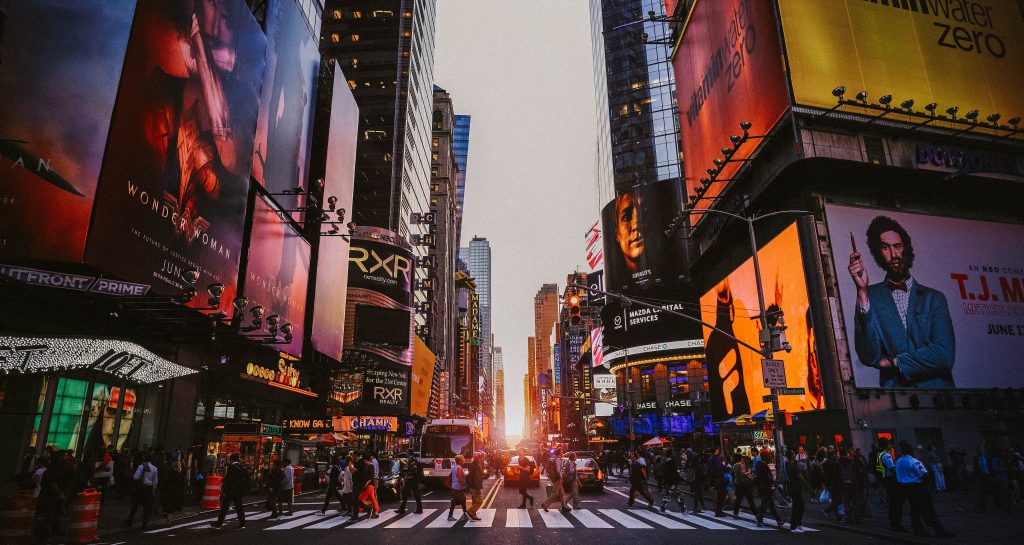 After ninety minutes of waiting to go through customs, we were finally on American soil. We immediately filled our Metrocard (indispensable in New York) and we were on our way to our Airbnb apartment.

After unpacking and dividing the room we went to Greenwich Village, where we had booked seats for a 10PM Comedy Cellar show. Because we lost so much time at customs, our only possibility to dine was a quick piece of pizza. A mixture of cheese, fat, oil, fat, fat, tomato and dough. Beware to order pizza. New York Style pizza is something completely different from a pizza from Rome.

The Comedy Cellar is a very famous clun in the stand-up comedy world. Legends like Robin Williams, Chris Rock & Louis C.K. have already been reviewed here. An activity that absolutely should not be missing in your New York experience.

Getting up early was no problem. The air conditioning did not work because of the unexpected high temperatures (33°C !) that surprised the whole building. Everyone got up on time and was eager to start our first full day in New York.

From our apartment we walked from Lower East Side through Chinatown to the Financial District while enjoying the view of the Manhattan Bridge. We bought a cream cheese bagel for $1.75 and a $1.25 coffee from a food truck and walked on to the WTC Memorial. After a good look at the large symbolic holes in the ground we entered the 9/11 Museum.

As someone who visited this place a second time, I strongly recommend that you book tickets in advance to skip the outdoor queues.

In the museum it became very oppressive for some because of the impact of September 11th on our society. The museum manages to tell the stories of the victims with respect. You get the story of ‘Ladder 3’. A fire platoon that died after the impact of the plane in the building. When you walk into tower 1, you get to see the whole story. From before 9/11 to the minutes before the impact, the details of the impact, the response of the people, the first emergency calls, the first Live broadcasts, the sanctions to close down the entire American airspace, ….. It’s just so much and it leaves you speechless. 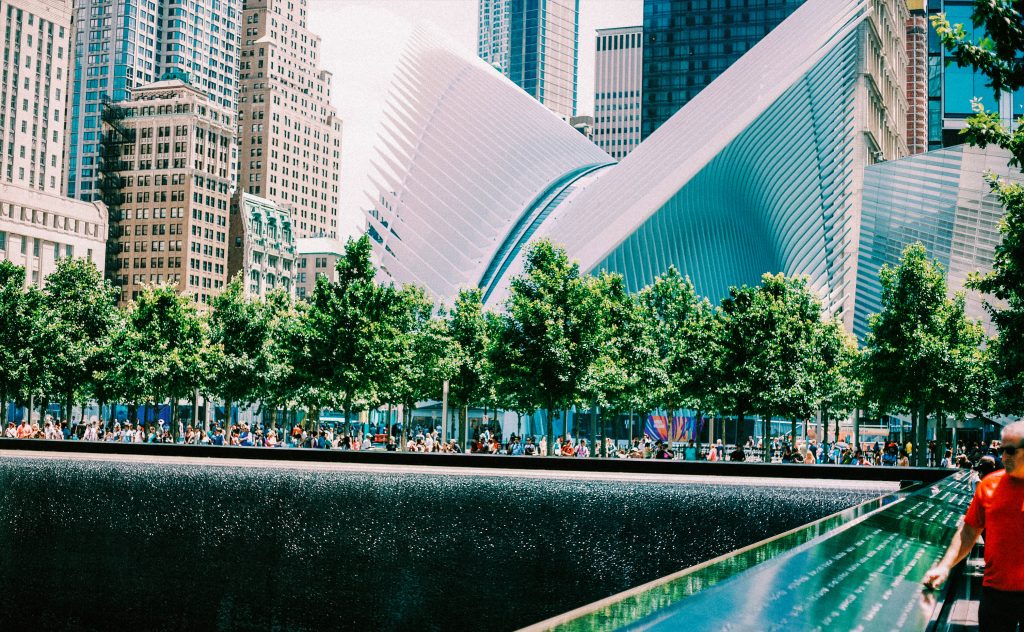 Once outside we walked past Wallstreet and went to the Staten Island Ferry to admire the skyline of New York and sail past Lady Liberty. After being overwhelmed by enthusiastic tourists fighting for the best spot on the boat, we found ourselves alone in the best position to take pictures.

We still don’t know for sure where all the tourists went.

TEAM-NO-SLEEP Team-a whole lotta laughs though! Sometimes I look at them and think where the hell did I find those weirdo’s? I love them though, they’re the funniest group of guys I know! 8 Dudes roaming the streets of Manhattan, quite the trip! #nyc #newyork #newyorkcity #newyorkskyline #statenislandferry #goossenick #travelblog #travel

After leaving the boat we had a drink. The next ferry, we just didn’t make it! So first try to see when the next ride is before you go to get your drink.

Afterwards we made a walk through Wallstreet and took some pictures with the famous Bull. We kept walking in ‘The Big Apple’ and got a good picture of the city: Busy, scent of urine when the sun shines and lots of weirdo’s. We walked up the Brooklyn Bridge and knew from the start that it’d be a serious walk. But it’s not too bad when you enjoy the view of the Brooklyn Heights, the Manhattan Skyline and the Brooklyn Bridge Architecture…

We really felt the difference between the chaos in Manhattan and the down-to-earth vibe of Williamsburg. We entered Walter Foods, which looked like a hipster paradise.

After our meal we entered a Latin bar and looked back on our first full day in New York.

Get up and go!

To Chelsea, Manhattan where we had planned a morning walk over the High Line. Because we were so close to the Chelsea Market we decided to get our breakfast and take a look. It’s a large, cozy food market where you can eat all day. Breakfast, lunch, dinner, snacks, sweets, doesn’t matter. If you’re close, make sure you visit!

After our bacon and cheese sandwich, we were ready to take a walk along the High Line, an old railway line that also runs between Manhattan’s big buildings and Manhattan’s coolest buildings.

At the end of the High Line we found the New York Citibikes. This means that New Yorkers saw eight guys racing on small bikes. The first thing we passed?

The easiest place on Earth to get used to your bike, right?

We continued to enjoy our ride until the beginning of Central Park. Quickly made a pit stop, had some coffee and used the Citibikes again. This time we admired the architecture of the Guggenheim museum. If you are interested in seeing the Guggenheim museum from the inside as well, come here on Saturday between 5:45 and 7:45PM and pay whatever you want.

New York should not be an expensive trip. Many activities and attractions are completely free on certain days. Just a matter of good planning. 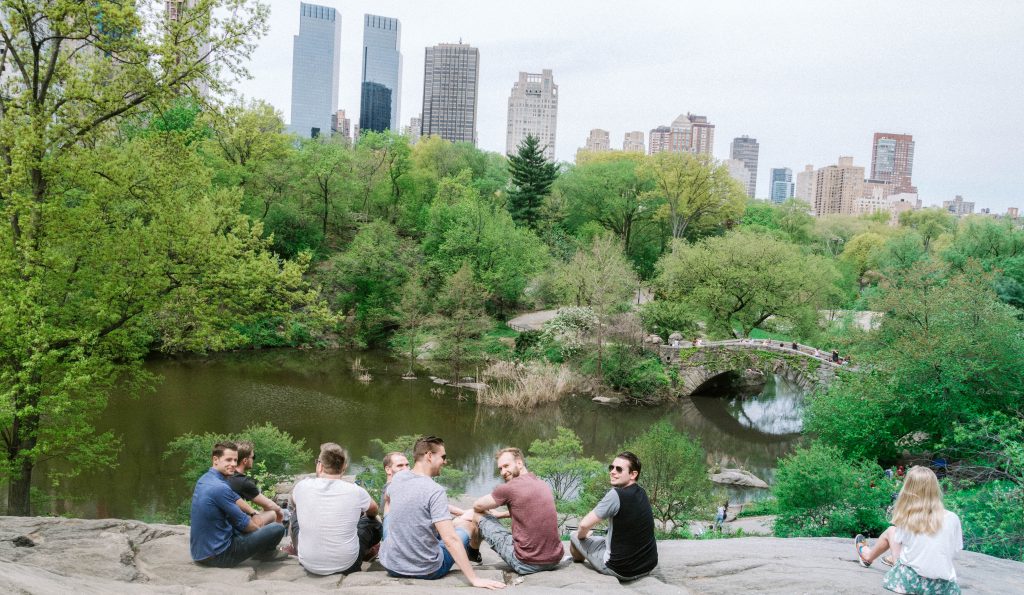 We spent the whole afternoon in and around Central Park on our Citibike bike and also had a quick break at the Museum of Natural History. If you want to visit this famous museum thoroughly, plan an entire afternoon. We chose the superficial Hollywood tour in 30 minutes. After that we continued with the bikes back to the vicinity of Times Square so we could eat at Carmine’s.

Carmine’s is an American “Italian” restaurant where you share plateaus like a family. The concept is good and the food is good, but we should have thought twice when booking a restaurant near Times Squares.

Nevertheless, our bellies were full and we decided to continue our digestion on Times Square. Quietly enjoying all the lights and chaos this place has to offer. I advise you to take your time on the big red stairs and do some peoplespotting.

We went home, past the local night shop, bought a drink and discovered the local party scene. Now I can’t clearly remember the names of the locations we went to. It was in Lower East Side and then we took a taxi to the Mean Fiddler. All in all it was a good night, I think.

Three hours of sleep later and I was on my way to Dunkin’ Donuts to order 36 donuts and a large cup of coffee. Nothing like diabetes to forget your alcohol problems, right?

Nobody enjoyed the American breakfast and after a slow morning we took our citibikes for a last ride to 34th Street Madison Square Garden where we had an arena tour. Our tour guide was called Bryan.

Bryan was a bit crazy.

The tour is not that special and I only recommend it to the most crazy basketball fans.

Shopping! When you’re in New York City, you should shop, right? So that’s how we spent our hangover Sunday afternoon. Some had lists of their girlfriend they had to get so we enjoyed the atmosphere in and around Fifth, Sixth and Seventh Avenue.

Afterwards we chose a quick bite in a diner and went to bed on time.

We slept very well and took all the time in the world to pack our suitcases and clean the apartment. Because our Airbnb host could not store our bags until we had to leave for the airport, we used ‘Vertoe‘ to find a warehouse near the metro. Easy to use, not that expensive, I really recommend this service if you’re in the same trouble as we were then.

It took three days but our first healthy meal took place at Bluestone Lane. Hummus toast, avocado toast and the chicken sandwich were very popular. What makes Bluestone special is their great coffee. It tastes great, especially if you know that watery New York coffee in the morning.

Our last hours in Manhattan were spent buying new sneakers and eating a Belgian waffle (Well, real patriots certainly). To conclude, we had a conversation in Bryant Park about one of the fastest weekends ever.

I’d strongly advise you to rent an Airbnb apartment in New York, as hotels in Manhattan are really expensive. You can use my link to subscribe to Airbnb as you’d help me out giving me a fee! If you wondered, these pictures were taken with a Nikon D5300 and our planning was helped by reading through the Lonely Planet edition of New York.

If you want to re-live my experience, you can go to my Instagram profile and check my story where New York is highlighted.